During these months, I learned to enjoy cooking with Potatoes.  I also learned that I need to be very careful with the bag of potatoes I buy.  Honestly, there are some produce grocers who are dishonest.  If you are not careful, you just bought a bag of potatoes that are repackaged.  Half of the bag of potatoes are exchanged, mixed, repackaged with old potatoes.  Very dishonest.  With those overhead lights in the produce section, you probably noticed those fluorescent light bulbs causes eyes not to be able to see clearly of the freshness of the produce.
Anyways, I learned to make French Fries baked in the oven instead of deep frying.  They turn out great.  Then, I learned to quickly boil the potatoes in the pressure cookers and make mashed potatoes for the Shepherd's pie or Croquettes, Stews, Hash Browns.  Sometimes, I slice them thinly and make potato chips.
How about you?
Baking sliced potatoes.

In the Chicken Stew

These Croquettes/KORO'KE can be freezed and baked later in the oven by drizzling organic avocado oil on them at 400'F for 25 - 30 min or until browned. 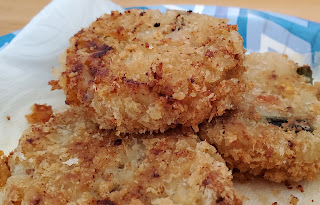