I really can't believe it's 2018, and tomorrow is Chinese New Year!!  First time in a long lunar years that the Chinese New Year is at the middle of the month.   And it also means, the spring has arrived.  And it is true.  If you looked at your garden, plants are blossoming here and there.  I have so many postings that I want to do, but with my current schedule, looks like it is on the back burner.
But I want to take this free time to post something related to my African Violets that I have been able to successfully propagate from its original plant.  The original plant was given to me from a retired co-worker.  When I got it, there were two flowers on it.  Then, it disappeared.  I had no idea how to grow them.  I think in one of the posting, I posted their progress in rooting from a cutting.  Well, those cuttings are now 1 year and a half years old.  Each one has been growing well and healthy.  By a lucky chance, I found out my African Violets love the bounded tall cups as their medium to grow in.  I tried originally with ceramic container, but they did not do much, except to just grow some new leaves and die.  So, here is my picture journal of my African Violets.  The leaf cutting would grow a healthy bunch of root after a couple months.  As long as the leaf looks green and firm, when planted, it will grow into a healthy Violet plant.
1.  Poked a bunch of holes in aluminum foil or plastic wrap to go over a cupful of water.
2.  Leave it under office's ceiling light. 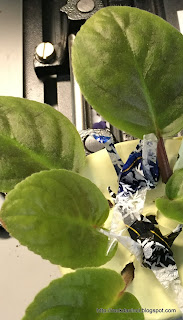 3.  After a few weeks... 2 months?  *Change water often.  Don't let the green algae to form.
4.  When the root looks strong and leaves looks healthy, transplant them into a pot with Soil for African Violets.  I added a bit more of Perlite to keep the soil light.
5.  Keep the soil moist and leave the new plant under the office ceiling light.
6.  Do not water until the soil feel quite dry but not dried up. 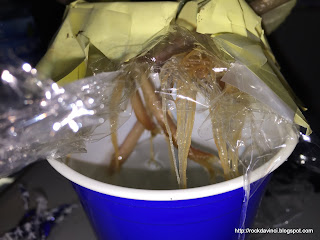 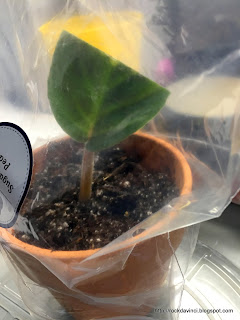 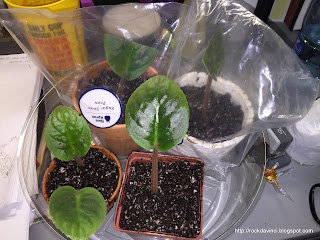 After two to three months, if the leaf survive, you will eventually see a tiny leaf growing at the bottom of the stem. 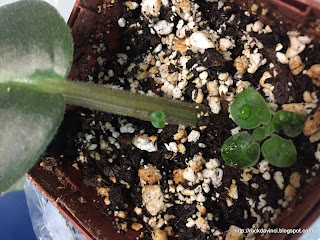 The new leaves eventually form into new Violet plant.  The healthy plant leaves are shiny, especially the cutting that rooted that you planted in.  It will feel very firm and strong. 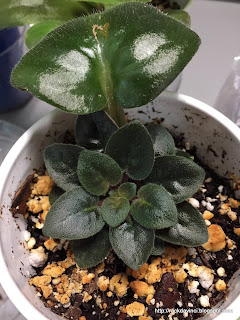 As the new crown starts to form, the cutting will eventually diminish in itself.  Eventually, it will exhaust itself and wither. 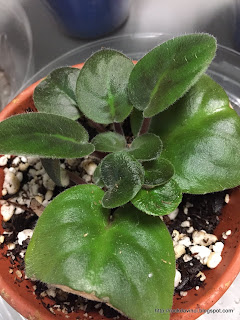 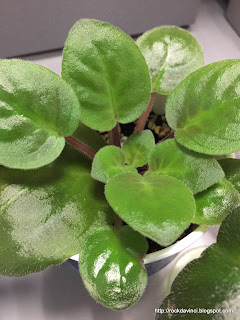 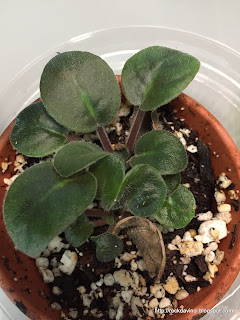 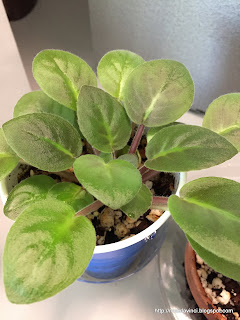 Based on my observation, the plants in clay pot grew the slowest.  All the other ones in tall plastic cups thrived.  The mother plant is to the right with large crown.   I took two healthy plants home (the ones in two tall blue cups.) along with their mother to take care. 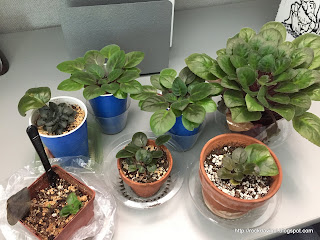 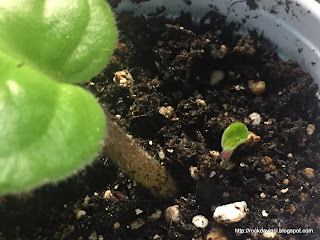 Constant temp and light.  And yes, as you have read it in many other expert African Violet growers' site, it is true, the African Violet needs a lot of light.  I fed them African Violet liquid drops when I water them.  I started to do that in the spring of 2017.  It started to flower when the daylight became longer. 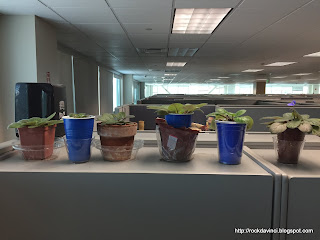 These are the new pups that became strong and grew large crown. They eventually flowered in late spring of 2017.  (Sorry for the lack of real vocab to describe.  As you can tell, I am an amateur.) 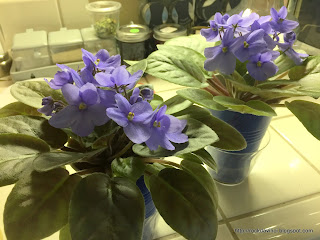 The ones at the office started to bloom, too. 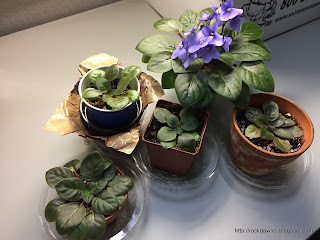 It is very interesting to observe their growth. 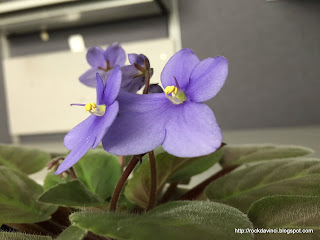 This is the original mother Violet.  I decided to take it home and replant it into a Taller TACO Bell cup I had. But the diameter at the top is no different than what it was in originally.  See how beautiful those flowers are.    I took the expert's advice and pinch or snip off the expended flowers to keep them continue growing flowers.  Since last spring, it continues to flower. 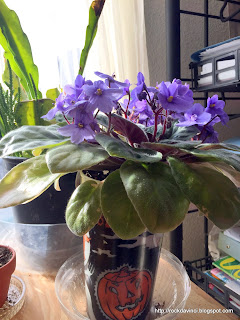 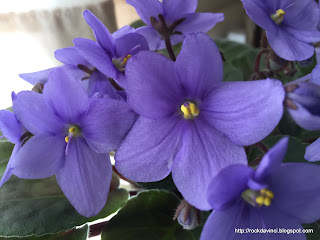 At a close macro shot, you can see this shiny sparkles on their petals. 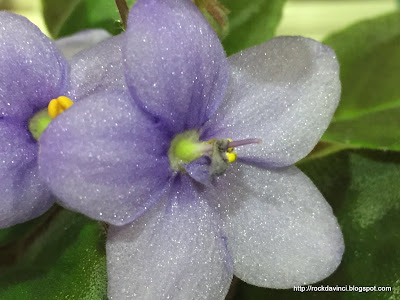 Well. That's all the time I have.  Wish you all a Happy Chinese New Year.  KAI HWA FU' GWEI
meaning-May your fortune be like flower blossom... something like that.
on February 15, 2018 No comments:

This year, the Nectarine tree did really great.  More than I can handle, actually.  With extra nectarines, I topped my favorite Almond Cook...