It's anyway you like it - Thank them, Clean them.  Cook - Steam, Boil, Grill, Pan fry or however you like it... Coconut and curry sauce, ginger soy and vinegar dipping sauce, butter... it was good.

All Nice and Clean.  Ready for steaming with slice of Ginger and or green onion.

Make some Chinese pancake to go along.

What a disappointment in calling the original HVAC installation company for my home.   September of last year, I had to replace my home HVAC unit.  I thought, I should call the original installer.  I thought they would know what to do with their installed unit and give the best services.  What a mistake.  I should have called what is being entrusted and advertised by the local news station.  That doesn't ensure individual workers they assign to your job site is an expert but at least the local news station would not sponsor their ads if they have a bad reputation.

Right in middle of hottest summer of 2021, my AC stopped generating cold air.  It blows, but not cold air.  The freon is likely the culprit.  After calling the local Beutler company, the usual sales pitch of this and that about the particular freon is no longer in support, and had to use different ones, but my AC model is too old, etc. Well, I figured that it's been 21 years, so I could upgrade it and get some renewal incentive from the upgrading to an energy efficient ones during the Income tax reporting.  Because I messed up on my own "get 3 bids" before any work rule.  There it is.

2.  The workers are not 100% sure what is going on.  Had to come back they said with parts.  They leave and never returned.

3.  Took another week before "HomeDepot" service desk took down the information and scheduled someone to come in.  HomeDepot?  where did that come from?  I thought I was calling Beutler!  I was not even told by the sales person that I will be dealing with the HomeDepot.  One week passed without AC in hot 100+ summer heat.  Finally, someone came.  They figured out that it was miswired.  But the thermostat controller won't program and won't turn on anything, etc. etc.  They replaced the thermostat controller twice.  Then, it took another week to find out that HEATER would not turn on.  Upstair AC would turn on, but the downstairs' controller would not even turn on.  Somewhere after a month of noneworking unit, their accounting started to calling me and harrassing me rudely to demand payment.  I was wondering, "What? they use collection agency to request for payment?"  I told her the installation is not complete and there more work to be done.  I will pay as soon as the installation is finished.  Then, a couple of weeks later, workers returned and fixed the wiring issue.  A few days later, a sstaff from some kind of airflow certification company in SF came and tested each vent.  He said each vent is working.  And he passed it.  In the meantime, the rain came down hard.  But so much for trusting.  I should have checked and double checked each thermostat controls. He asked me if I want to leave the thermostat On or Off? As he was testing the air vent with Heater turned on, I told him that I dont' turn on the heater until the winter, so just leave the thermostat controller switch to HEAT to OFF.  After he left, a couple of days later, the continuing rain brought down the chill.  So, I thought I would turn on the HEATER to warm up.  Surprise! the none of the thermostat would even power on.  It's like "dead".  No response.

4.  During the installation, I was not even aware that there is a part of the air duct outlet ... like a chimney that goes out to the roof.  A workmen finally came to troubleshoot. While inspecting the attic where the Heating unit is, he found a tiny slit of light coming in from the roof and a puddle of water in the attic.  He found a gap between the air duct and roof enclosure.  The previous workers did not even pay attention to seal the area.  So, when the downpour of rain came sipping through the crack and when the puddle of water touched the electrical, the controller shutdown.  I am not happy that there is a gap on the roof where rain was coming into the attic.  At least this worker knew what to do and went up the roof to seal it up.   The thermostat finally came alive - powered on and allowed him to go through the menu to turn on the heater or the AC.

So much for putting a trust on the service call.

5. Another shocker is that HomeDepot / Beutler workers tried to use my personal garden rocks to pile up to support the AC unit's platform.  When I found that out, I was in disbelief.  I insisted that they purchase several bags to refill the area and make the AC platform steady

After pointing it out several times, they finally replaced with several bags of garden rocks. 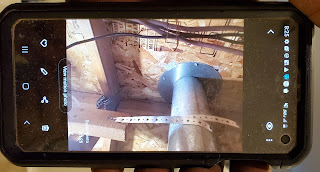 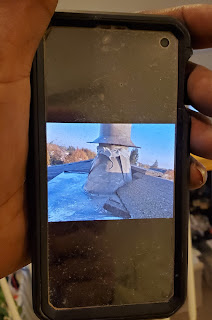 I tried to report the matter on the Consumer's Report site when the service survey dropped in mail Inbox.  But I found out that that site is useless one sided survey entry.  It did not allow me to state the matter of facts of poor service and issues I experienced.  I gave up.   So, here it is on my blog.  I am sure other home owners are much more savvy and smart in how to hire workmen.  I will have to remember to do my due diligence and get the 3 bids and check the company's reputation and background.  Make sure they send workers that work for the company, trained and not from some yonder 3rd party part-timers.  The poor workers give the real journeymen a bad reputation.