During Christmas holiday, I came across this "TheWand" Wine Purifier Ad.  I thought I would like to try it because I can never get past the first sip of the wine tasting without tasting the Sulfur in it.  Most of the people won't taste it, but it bothers me.  I am not a wine drinker but I decided to try it.  I find it quite ingenious and effective.  I even bought a wine bottle style purifier as a Christmas gift.   It says, it removes Histamines and Sulfites.  Sure enough, I had no itch or red dots on my body or headache afterwards.  That doesn't meant that I start drinking every day or week, but it's nice to use it during the special occasion when wine is included in the celebration.

It has been quite busy on a weekly basis ever since last winter when I brought in three gold fish out of my Lotus Ponds to keep them from freezing to death.  They thrive and gotten pretty big.  It was not intention to keep them indoor, but it became a house pet along with three fan tail gold fish.  And to my surprise, the fantail gold fish have been laying eggs every 2 to 3 weeks!.  The first group had 40 some frys.  But unfortunately after several weeks of trying to grow them, because of my lack of knowledge, one by one, they disappeared.

And I also understand now why the aquarium section's staff always asks how large is the tank for the goldfish that I am buying.  Thus far, knock on woods, these fancy tail goldfish have been quite lively since last spring.  The comet orange goldfish keeps on growing and they need to go back out this late spring to do their job.... eat mosquitos... I think... but maybe not.  The Calico short fancy goldfish is really strange.  I found out that it is blind or it got blind.  It even got so fat in the belly that it lop sided up side down and so forth.  Then, I found out that it is "pregnant" and other fish were chasing it so aggressively that it injured it??  That's when I transferred all the fancy tail to a different tank.  Then, it laid eggs.

This one is the jail.  It was snapping at other fish during feeding so bad.  I gave it a solitary for a few days. 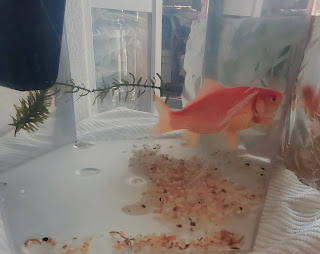 These two are females. 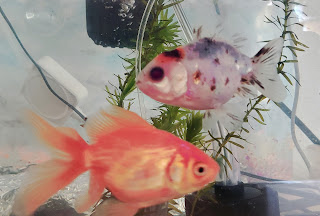 The golden black long fancy tail is the male.  He chases after the female to cause them to drop eggs. 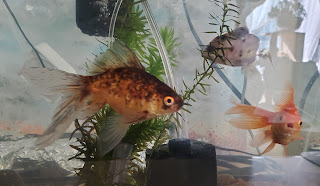 The clear balls with black dots are the fertiled eggs.  The white balls of fuzzy stuff didn't get fertilized and is growing fungus on them. 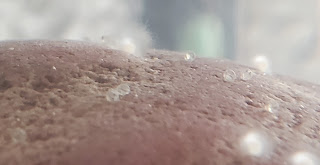 About after 3 or 4 days, you see movements in the cells. 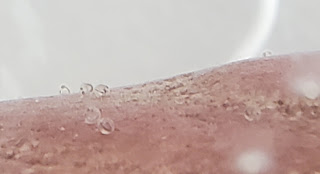 After 3 seeks, it's about 1 cm long.  But they started to die.  I must be giving them the wrong food and starved them to death or I just don't know how to take care of them.  I see fungus growing on them when they die, even when after I carefully change the water.  Each week, less and less of them survived. 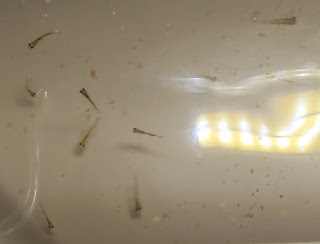 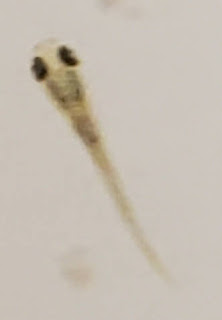 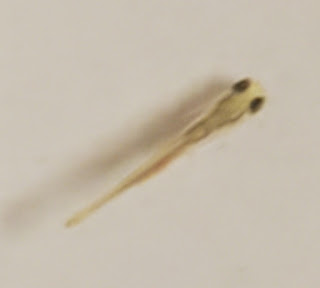 After several weeks, this one begin to grow front fins.  But after a few days later, it died, too.  Sad. 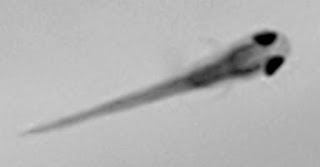 Well, I am not trying to raise goldfish, but every 2 to 3 week, I see the Calico goldfish enlarged abdomen, then, the gold black goldfish doing the chase.  I see the eggs attached to the rock.  But they ate them.  That's okay with me.  Let it be.

This is merely my personal opinion after trying three different types of Air Fryer.  I was hoping to get one that would be part of my daily appliance to use.  But after all I decided that Instant Pot 6 qt with air fryer is even an over kill.  If the Sur La Table brand Air Fryer came with the stainless steel or aluminum bottom tray, it would have been a winner.  I had to return it just because it emitted nasty teflon fume during air frying.  I could have easily replaced my counter-top (mini) Oster toaster convection oven or the double door Oster convection - both has not live up to the standard of "convection" baking that it claimed. 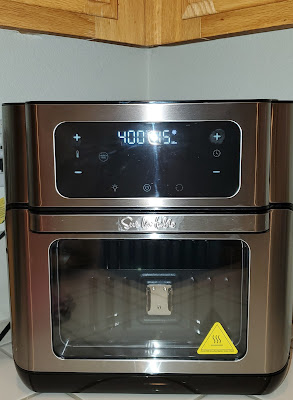 Option of using a rotating basket or non-stick basket.  and the bottom tray is non-stick also. 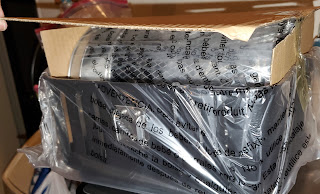 Too bad, I couldn't eat the French fries regardless because the bottom tray emitted the terrible odor and transferred the smell to the food.
The Instant Pot Air Fryer is bulky.  The inner baskets should have been Teflon on Non-Stick Free.  I just don't use them, and use the Instant Pot for other cooking - Pressure cooker.

The Sweet Potato fries turned out with the nasty non-stick plastic smell also.

When I try other methods of Air Frying, I lay the cut French Fries on a sheet pan drizzled with some oil and place them on parchment paper over copper air fryer pan, the results has been very satisfactory than the "Air Fryer" oven.  Even in a gas Oven, baking the French fries over the oiled parchment paper on a baking sheet have been satisfactory.  At this point I kept the Instant Pot for other features - Pressure cooking, even though I dislike it's non-stick coated air fry basket.