I noticed whenever I double the recipe, there is a lot more chance for failure.  Mixing time and the cooking time becomes critical controller in the quality. I think they turned out all right, but they could be better.  Darn! some eggs got frozen from keeping the temperature too low due to hot temp in the garage.  It still worked out after thawing it out.  Kind of pretty.  It reminds me of the Amber in the Jurassic Park movie. 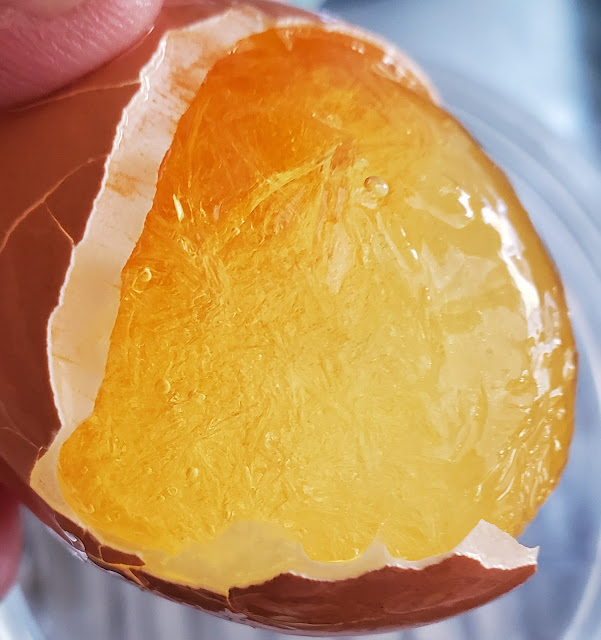 Making the double amount of Caramel was time consuming.

(I really hate this new version of Blogger app feature.  Can't adjust the spacing like in the old days.)

I tried not to make the mixture floathy, but what is interesting is the result in baking in the gas oven and in the counter top electric convection oven.

The ones in the countertop electric convection oven seem to be more smoother than the gas oven ones.

These were baked in the gas oven.  I watched the baking time very carefully to make sure that they are not over baked.  When the top is touched with finger, the flan jiggles slightly still.

Let them cook 15 min in the bath before taking them out.

These are actually my 3rd Flan baking.  During the 2nd Flan baking, I noticed when I went over the baking time because I was too busy doing something, the flan turned out bubbly and more solid than creamy smooth.