By the way, all these recipe testings I posted in June were not completed in the weeks of June.  They were completed in May.   I just did not have the time to post them due to my crazy final exam and oral surgery (I could not taste well).  It was a very stressful months, and I almost gave up on sharing them over the blog.  But I still cooked every night, testing the recipes and cooking methods, ....    So here is my adaptation of Mustard Vinaigrette (from Ad Hoc cookbook, p 179) with my Potato Salad with Beets served with hard boil egg wedges.  I am quite impressed with the function of Dijon mustard in vinaigrette and in other dressings.  It seems to provide that secret molecular combination to bring the mixture of vinegar and olive oil as in 'emulsification' together.  A tiny mustard seed indeed have a great power.   I like the smooth texture of this vinaigrette and less acidic taste from the champagne vinegar used.  Boil large diced potatoes and medium diced carrots till fork tender.  Mince 1 Tb of onions.  Mix in vinaigrette to chopped red beets and carrots first, then fold into potatoes.  Add salt and fresh ground pepper to taste.  Toss in some chopped cilantro leaves from the garden.  Slice one hard boiled egg into wedges and serve. 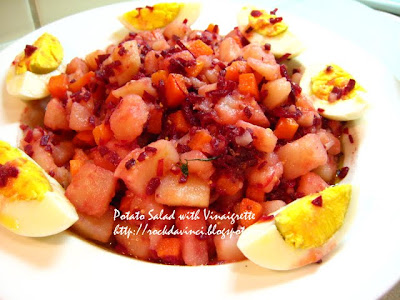 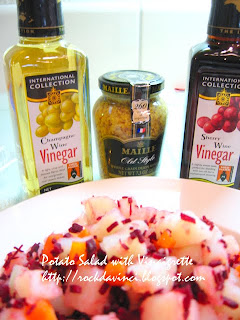 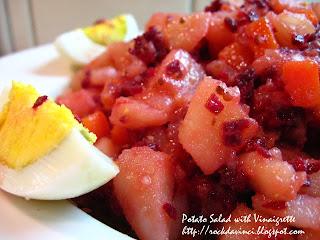 These were all 2 to 3 inch pot size succulent cactus or whatever else they are called.  Very interesting things to observed are that as soon...