After working with my first ergonomic mouse by Logitech, my wrist has been working comfortably for 13 years.  Then it started to show a bit of oddity when moving as though it is skipping or missing.   It could be dirty and needs cleaning, but it is a wireless laser mouse.  There is no ball to clean like in the old mouse.  So I purchased a new one.  I didn't know the one I have been using costed around $250.  But it was a great mouse for my hand size and shape.  It has a great round support under my palm and moves without giving the strain during drag and drop or sliding sideways.  And it costed only $1.60/mth.   I still have it and still use it occassionally as a backup.  Of the two new mouse I purchased - same brand, Logitech, I end up with the small wireless mouse M705.  The larger wireless laser mouse  MX Master 2S is supposed to be a replacement to the Logitech Performance MX was a disappointment.  I am not sure what the designer was thinking, but it lost the ergonomic grip that Performance MX have under the palm.  I even wondered that slight slant slope and sandpaper like feel saved Logitech money and made money from that awful design change.  My hand felt the discomfort right away.  No one wants to hold onto a sandpaper for hours.

MX Master 2S has this weird wing that lost its comfortable round shaped cradle for the thumb.  And has a weird sandy texture.  Imagine this designer never had to hold onto  a mouse to work on annual budget Excel spreadsheet for hours.. 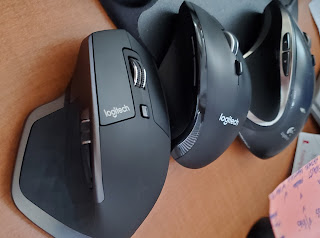 It has a strange ski slope shape that would not allow fingers to rest cradling over it like the other ones that gives relief to the fingers that have been clicking away working on the budget spreadsheet or drawings.  See the shine on the Performance MX?  That texture cover gives the "cool" feeling under the palm and fingers.  MX Master 2S was giving out heat or generating heat under my palm.  I did not want to hold onto it because it became uncomfortable.

M705 next to Performance MX - even though M705 is much smaller, the cover texture is similar to the Performance MX.  Feel nice and cool under the palm. Compared to the MX Master 2S above, M705 has this slight indent cradle for the index finger that smoothly cradles it.  The MX Master 2S does not.

You see that slight indent slope to the M705? (The large one is Performance MX attached to recharge cord.) 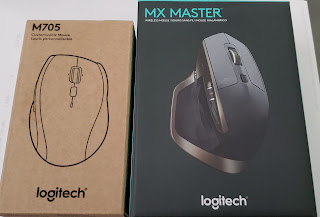