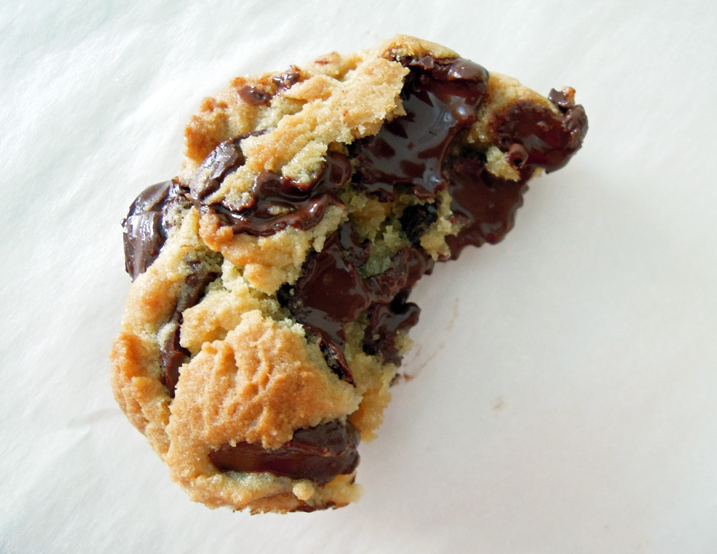 I got this Chewy Chocolate Chip Cookie recipe that appeared in my Facebook posting from Alton Brown's website.
http://altonbrown.com/the-chewy-chocolate-chip-cookie-recipe/
The picture looks so good, I wanted to try it.  It looks like it is just loaded with chocolates.  Chewy chocolate chip cookies has been my challenge for a long long time.  Not that I particularly like to eat cookies but the idea of making it "like that one!" intrigues me.  Often at the office party or ordered in luncheon, cookies are served.  Everyone raved about the chewy guey chocolate chip cookies.  I don't particularly like cookie, including my favorite oatmeal raisin cookie that is commercially made because I know it got tons of heavy corn syrup and unspeakable guey ingredients in it that I can taste them unpleasantly in my mouth.  But I want to make cookies like that.   So, there is my baking class' theory, Martha Stewart's and Food52's posting on the theories of what make cookies cakey, chewy, or crispy.  I've done that and still not to my satisfaction.
This particular "The Chewy Chocolate Chip Cookie" hack is by Alton Brown. And I agree with him about the difference it would make in baking if you change the ratio of brown sugar and white sugar.
There has not been a bad recipe that I tried from Alton Brown's books I own.  His Chicken Curry Pot Pie and Overnight Cinnamon Rolls are MY FAVORITES.  So, I thought I would try Alton's recipe for the Chewy Chocolate Chip Cookie.
The image from his posting shows that there are tons of Chocolate chips in a single cookie.
Unfortunately I have to work with only 4 ounces of great tasting European Dark Chocolate Pistoles I have.  I chopped them up and added to the flour ingredients.  Bad side to this method is that the chocolates gets uneven chop and some get powdery slivers.  This cause the chocolate to dissolved into the moist flour mixture. It is not what we really want for this testing.
As for the taste?  Using my great Europe-Style 82% fat unsalted butter, the cookies taste great.
As for the chewiness, it's there, but I don't think it's the same as the Alton's cookies.
But, it's turned out good though.
My test involved in the sheeting method.  My theory is more in the technique on how the cookie dough is being formed and placed on the baking sheet.  Sure, the ingredients matter.  But I leave that to Alton Brown's recipe.  But, if I placed the cookie dough the certain way, the cookie would not turn out the same.
So, this is what you should do or not do or wanted to do with your premium cookie dough you prepared.  And if you want to have cookie that look like Alton, I said to myself - have to have the same amount of Chocolate Chips the next time, and baking soda.   I ran out of baking soda and cream of tartar is no where to be found, so I just used baking powder.
Ingredients:
Interestingly in his preparation method, he mentions paper plate as part of the preparation tool.   Because ever since I have been mixing my own pastry flour or shifting flour with other dry ingredients. I put all my dry ingredients in my hand-crank-shifter over the paper plate.  Shift.  Put the shifter onto different paper plate.  Pick up the plate with dry ingredients like a hard Taco shell and pour them into the shifter.  Repeat.   I also just Whisk dry ingredients together in a mixing bowl.
So, Premix your dry ingredients.
In Alton's instruction, butter is melted in a pot, then, cooled slightly.  Then, beaten in a mixer bowl with sugar.
Not that I want to change his method and I should followed it if I want the same result, but I end up beating up the butter at room temperature.  Add sugar.  Beat until creamy.   I think I should not have done that either?  because I know beating the butter and or egg with sugar till pale would create a fine crumb product vs just beat them together to combine.
In a separate bowl, hand mixed egg, milk, vanilla.  Just beat enough to combine.  Then, while the mixer is running, add egg mixture.  Blend until well incorporated with the butter mixture - 30 seconds.

Slide in flour mixture from the paper plate with mixer at the slowest speed. or Hand mix in with spatula like I do.
**Remember, if your mixer is NOT designed with air-tight housing right above the beater head unit, adding dry ingredients such as flour mixture while the beater attachment is running would cause the dry mixture to build up inside the housing and around the motor.  Eventually your precious mixture would stop working as though there is no power going through the mixer.  Just like what happened to my old Master mixer.
Add chocolate chip and mix to distribute evenly with the dough.
Cover and Refrigerate the dough for an hour.
Preheat oven to 375'F  Place the rack in top one third of the oven and bottom third of the oven.  But I only baked one sheet at a time.
Scoop the dough into 1-1/2 oz portion.  Place six on each half sheet pan covered with Silpat or parchment paper. 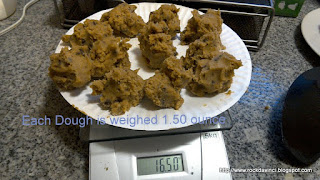 *Note:  If you are using a dark Silpat - the cookie dough would brown at the bottom much quicker than the light color Silpat
Bake for 7 to 8 min. and Remove from oven.  I used dark silpat, so the bottom and edge of the cookies are browned.
Test 1:
Place the portioned dough ball on Silpat and pressed down with the palm of your hand.
Result:
Produced flatter and smooth surface cookies.
Chewiness:
So so - because I only had 4 ounces of chocolate chips 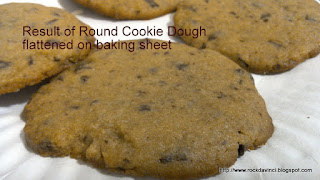 Test 2:
Place the portioned dough ball on Silpat and just press down in the center slightly.
Result:
Produced slightly thicker cookies.  The observable chewy appearance.
Chewiness:
Getting there. 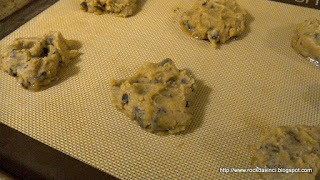 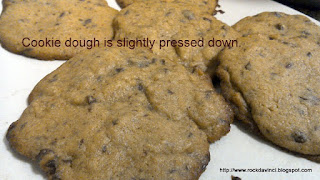 Test 3:
Place the portioned balls on Silpat as is.
Result:
Produced rougher thicker cookies.
Chewiness:
It can be better. 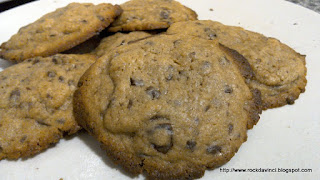 Taste of all 24 cookies?   Excellent taste.   Chocolaty and satisfying.
Let's do it again!
Before I can take the picture and taste tested the last batch of cookies, it disappeared into someone's tummy.   Hot cookies are always tastier as they say.

Time flies.  Already August.  While at home quarantine, we still want to celebrate and carry on family tradition.  It's like making Chri...