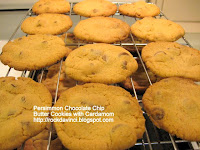 This is the Persimmon Chocolate Chip Butter Cookies with Cardamom that you make from the rest of the cookie batter from the Persimmon Chocolate Chip Butter Cookie Cups.  There are cloves and cardamom in this recipe.  I seem to have become allergic to the new group of ground "Cinnamon" that showed up in the market ever since my jar of ground cinnamon got used up.  Not sure why but according to some information I gathered, the "Saigon Cinnamon" is different from the regular "Ceylon Cinnamon".  Since none of the manufacturer has identified their Cinnamon as which - Ceylon or Cassia Cinnamon on the label, unless you call, I assume that they have gone cheap and is using Saigon Cinnamon/Cassia Cinnamon instead.  That's where I am finding trouble because after eating baked goods with "cinnamon", my mouth gets puffy.  Here is a link where you can see the difference: http://www.ceylon-cinnamon.com/Identify-Cinnamon.htm

And a warning I just found out about "Coumarin" that's found in the "cassia" family Cinnamon. http://www.bfr.bund.de/cd/8487 Whether these are reliable source or not, they are talking about it. Because my mouth has been responding differently in the last 6 months to anything with Cinnamon, I am being cautious abou it.  So, I decided to test with Cloves and Cardamom and find them very tasty with dehydrated Persimmons.

From the rest of the batter left from making Persimmon Chocolate Chip Butter Cookie Cups, take a Tablespoonful of dough and spread them into 2" round disk. Sometimes I like my cookies in bite size, sometimes large. But if you are experienced baker, likely you can tell from the ingredients that this recipe will make 2 dozen cookies.
on December 12, 2009